1960s & 1970s
During the 1960s and 1970s, the City saw the first contemporary winding subdivisions introduced, as well as the building of King James, its first office park. Interstate 90 was completed in 1976, linking the City with downtown Cleveland. By 1980, the population was 19,483. Soon after, Crocker Road was extended to Center Ridge Road and Ranney Parkway was developed as an industrial and office park area. After 5 years of planning and 2 years of construction, St. John West Shore Hospital opened in 1981. It was later added onto and is now affiliated with University Hospitals and known as St. John Medical Center. 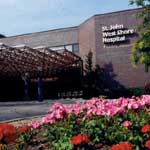 1980s
By 1987 more than 10,000 people worked in Westlake. By 1990, 27,018 residents called the City home, some occupying new executive homes or new luxury apartments or condominiums, and others moving into well-maintained, existing housing stock. The period also included the opening of a new public library and a new post office.

1990s
The early 1990s saw the construction of several new city facilities including a police station and two new fire stations, as well as the acquisition of a City golf course, now called Meadowood, and the opening of a new City-owned Westside Nature Park off Bradley Road. The Promenade of Westlake Shopping Center brought a new array of shopping options to the west side of the City. In 1998, the City built an 80,000 square foot recreation center in the midst of an 86-acre park and in 2006 added 19,000 square feet to it.
Nixle Alerts
City Documents
Online Payments
Employment
Report a Concern
Meeting Webcasts
[]