The City of Westlake has sister city alliances with the Town of Tralee, Ireland and the Town of Kingsville in Essex County/Ontario in Canada. Sister Cities International is a nonprofit organization that helps to create partnerships in an effort to exchange information and ideas, while building friendships and understanding cultural differences.

Mayors from the two towns have been guests in the city. Numerous contacts have also evolved with the city's schools, historical society, and other organizations and individuals.  Both cities have flower boxes on Hilliard Boulevard named in their honor.

Our Sister City program is made possible through the generous support of Westlake World PartnersOpens a New Window..

In May 2009, the Town of Tralee Opens a New Window. , Ireland became Westlake’s sister city (known as "Twin Towns" in Ireland) through the Sister Cities International program.  Tralee is located in the southwest region of Ireland, on the northern side of the Dingle Peninsula. Tralee is the capital of Kerry County and is Ireland’s 8th largest town with a population of 23,691. 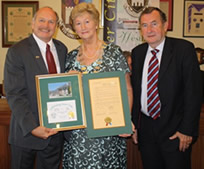 The Town of Tralee has plenty to offer including:

Visitor attractions include the:

Tralee is also home to the world famous Rose of Tralee International Festival Opens a New Window. held annually and in 2019 will be held August 23 - 27.  Westlake World Partners manages the Ohio Rose Center, one of 69 Rose Centers, each who select a Rose to participate in the the Tralee event.  The winner of the Ohio Rose Opens a New Window.  participates in Westlake's 4th of July parade as one of her many public appearances during the course of the year.
Read more about the Festival

Westlake was initially approached by Kingsville Mayor Nelson Santos regarding the possibility of a sister city relationship. The two cities share a bond of historical significance through the life and legacy of Jack Miner who was born in Dover Township (now Westlake) in 1865. He later moved with his family to present day Kingsville where he went on to become an internationally recognized conservationist. Kingsville offers a quaint downtown and rural atmosphere as compared with Westlake’s highly developed suburban mix of residential, commercial and retail establishments.